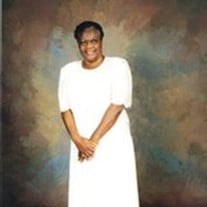 Anna Mae Chisholm, 73, of Savannah, GA entered into eternal rest on Sunday, January 31, 2010 at her residence under the excellent care of Hospice. Anna was born in Girard, Georgia and raised in Savannah's Frog Town Community. She is survived... View Obituary & Service Information

The family of Anna Chisholm created this Life Tributes page to make it easy to share your memories.

Send flowers to the Chisholm family.