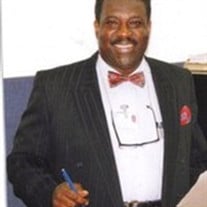 Mr. Billy Turner, 67, peacefully transitioned into eternal life on Tuesday, April 7, 2009 at Hospice of Savannah, Georgia. He was born January 5, 1942 in Brooklet, Georgia, the county of Bulloch to the late Mr. John Irvin Turner and Mrs. Naomie Johnson Turner. He served 3 years in the United States Army and completed tours of duty in Okinawa & the South Pacific. He was assigned to the Chemical & Biological Division to support Southeast Asia and various other units in the Vietnam War. He was a Test Technician with overseas secret clearance in the Chemical Core-Okinawa, the Keystone to the Pacific. His military involvement extended to the Georgia Army National Guard in an Electronics & Combat Communications Unit attaining the rank of Sergeant E-6. He received a Bachelor of Science Degree in Social Studies in 1971 and a Master of Science Degree in Public Administration in 1991 from Savannah State University. Billy worked to plant many seeds of success for the Black youth as an Employment Interviewer & Drug Counselor with the Georgia Department of Labor for over 13 years. He retired from public service in 1996 from Coastal Correctional Institute as a Senior Mental Health Counselor. Over these 28 years, Brother Turner always worked several other part- time jobs to raise and support his family. He was a Freemason and a member of The Ancient Egiptian Order. He is survived by his wife of 45 years, Mrs. Mildred Tremble Turner and out of this union was born two sons Michael Turner (Tshaka Malik Al-Kush) and Billy Ervin Turner. He also leaves a daughter, Loretha Tremble; granddaughter, Nia Imani Bradshaw-Turner, and goddaughter, Makayla A.E. Miller. Two sisters, Gordy Mae Doyle and Oma Roberson, and three brothers Matthew Turner, Fred Turner and Ray Turner; and a host of in-laws, nephews, nieces, cousins. Funeral Services for Billy Turner, Sr. will be held 11 a.m., Monday, April 13, 2009 at First Mount Bethel Baptist Church, 124 West Anderson Street. Interment: Glennville National Cemetery with Military honors, Glenvville, GA. Reposing at the Church Monday, 9 am until hour of service.

The family of Billy Turner created this Life Tributes page to make it easy to share your memories.

Send flowers to the Turner family.