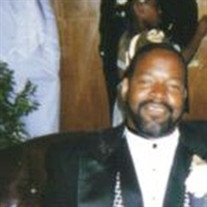 Mr. Cornelius Simmons, 55, passed away on Sunday, April 25, 2010 at Candler Hospital. He was a 1975 graduate of Jenkins High School. Mr. Simmons was a member of the Wolf Master's Club. He worked for 32 years as a Supervisor for the City of... View Obituary & Service Information

The family of Cornelius "Burney" Simmons created this Life Tributes page to make it easy to share your memories.

Send flowers to the Simmons family.