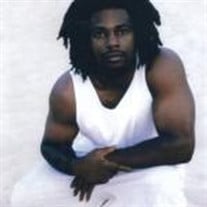 Mr. Dwayne L. Barnes, 34, passed away on Thursday, April 15, 2010 at Memorial Health UMC. He was a native of Savannah, GA. He was a member of the United House of Prayer. He leaves to cherish his memories: mother, Beverly Polite; father,... View Obituary & Service Information

The family of Dwayne L. Barnes created this Life Tributes page to make it easy to share your memories.

Send flowers to the Barnes family.