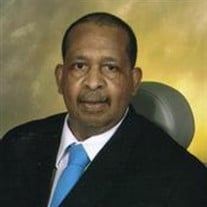 Enoch Mitchell, Jr., 66, passed away on Tuesday, April 10, 2012 at home under the excellent care of Advantage Hospice surrounded by his loving family. He was a native of Savannah, GA and was a member of the 1964 graduating class of Sol C. Johnson High School. He attended Savannah State College. Enoch served in the US Army and was a Vietnam Veteran. He retired from the Savannah Sugar Refinery after twenty two years of service. He was a member of St. Paul Missionary Baptist Church but later moved his membership to St. Anthony Padua which is now Resurrection of Our Lord Catholic Church. As a member of the church he was active in the Holy Name Society, Sons of Resurrection, on the Parish Council, in the Gospel Choir, and a member of the Merger Committee. Enoch was a member of Prince Hall Free and Accepted Masons Chapter 258. As a 33rd Degree Mason, he was a member of Hilton Lodge #2. As a member of District #1, he served in many capacities which included: District Deputy, Assistant District Deputy, District Patron, and Associate Patron. He also served as the Worthy Patron for Chapter 258 #117. Enoch also served as District Associate Chapter #489. He was also a Shriner and was a member of Omar Temple #21 where he served as the Past Master for Hill Lodge #2. He was preceded in death by: his parents, Enoch, Sr. and Mary Mitchell; brother, Charles Mitchell; three sisters, Barbara Blake, Helen Fields, and Janice Mitchell; and sister-in-law, Ernestine Green. He leaves to cherish his memories: Pearlene Palmer Mitchell; three daughters, Tiffany Coles (Vincent), Lestra Bradham, and Asa Green; two grandchildren, Victoria Coles and Elija Coles; brother, All Mitchell (Donie); three sisters, Carolyn Warner (Robert), Catherine Mitchell, and Veronica Kinlaw (Joseph); mother and father-in-law, Ernest and Edith Palmer; brothers-in-law, Willie Palmer (Dorothy), Jimmy Palmer (Shirley), Joseph Palmer (Jackie), and Lamar Palmer (Linda), Charles Green; and a host of nieces, nephews, cousins, other relatives and friends. Visitation: 6-8 p.m., Friday, April 13, 2012 at the church. Funeral Mass service will be held 11:00 a.m., Saturday, April 14, 2012 at Resurrection of Our Lord Catholic Church, 112 Fell Street, Father Robert Chaney, Officiating. Interment, Magnolia Memorial Gardens.

Enoch Mitchell, Jr., 66, passed away on Tuesday, April 10, 2012 at home under the excellent care of Advantage Hospice surrounded by his loving family. He was a native of Savannah, GA and was a member of the 1964 graduating class of Sol C.... View Obituary & Service Information

The family of Enoch Mitchell created this Life Tributes page to make it easy to share your memories.

Send flowers to the Mitchell family.