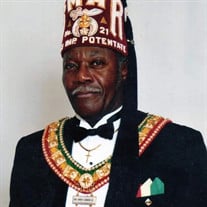 Rev. Enos V. Garvin was born on November 26, 1946, to the Late Major & Earlene Garvin, in Clyo, Ga. He is married to the lovely Sister Connie R. Garvin and together they have ten children. He attended the Public Schools in Effingham County, graduated from Springfield Central High School with honors, in 1963. He began studies at Savannah State College (Savannah State University) in 1973, but had to quit in 1975, in order to take care of his family. In 1992, he returned to his studies at Savannah State College and in 1994 he graduated “Cum Laude” with a B.S. in Sociology. Rev. Garvin was raised to a Master Mason in March, 1977. He was elected Worshipful Master of Clyo Lodge #262 from 1983-1985. He was elevated to the 32nd Degree in March of 1980 and 33rd Degree in October of 1991 and Elected Commander in Chief of Ezra Consistory #27 in 1994. He was appointed Area Coordinator of Ezra and Statesboro Consistory in 1995. He was also appointed in July 1995 until January 2001, as District Deputy Grand Master of First Masonic District, Jurisdiction of Georgia. He was exalted into the Georgia Chapter #1 of Holy Royal Arch Masons in 1984 and elected Most Excellent High Priest in June of 1997. He was dubbed into St. Phillips Commandery #9 of Knights Templar in 1984 and elected Most Eminent Commander in 1996. He was given the Eastern Star Degree in Clyo Chapter #297 in 1984 and served as Worthy Patron of Clyo Chapter #297 in 1996. He was a Knight with the Heroines of Jericho in 1991 and served as Most Worth Joshua of S.L. Gibbons Court #5 from December 1994 until December 1997. He was given the Cyrene Crusader and the Grand Degree in January 29, 2011 and he is now a member of Marilyn A. Tremble Court #4. He joined the Royal & Select Masons in 2007 and was elected Thrice Illustrious Master for 2011. He was also elected Rt. Ill. Grand Chaplain in Macon in May 2011. He became a Prince Hall Shriner in October 1980 and was elected Potentate of Omar Temple #21, in 1997. In January 2007 Rev. Garvin was appointed Deputy Imperial Chaplain and in August 2009 Rev. Garvin was awarded the Legion of Honor and The Honorary Past Imperial Potentate Degrees at the Imperial Council Session in Atlanta, Georgia. Enos leaves to cherish his memories, his wife Connie Garvin. His children: Enos V. Addison, Enos V. GarvinJr.(Stephanie Garvin), Biron G. Garvin, Arid S. Garvin, Terrell J. Garvin, Keith Roberts, Kevin Roberts, Elise Garvin, Latrice Rayborn (Michael Rayborn), Latrell Roberts Special Granddaughter: Akasia J. Bell Goddaughter: Andrea S. White Brothers & Sisters: Ellis A. Garvin Sr,. Israel L. Garvin (Nellie Garvin), Ellen E. Furman, Doretha Beckett A host of nieces, nephews, cousins, grands, great-grands and friends Funeral service will be held 11am Saturday, June 25, 2022 at First African Baptist Baptist Church of East Savannah 402 Treat Avenue. Interment Greenwich section of Bonaventure Cemetery. Visitation Friday 6pm - 7pm at Bonaventure Funeral Home "Masks Are Required"

Rev. Enos V. Garvin was born on November 26, 1946, to the Late Major & Earlene Garvin, in Clyo, Ga. He is married to the lovely Sister Connie R. Garvin and together they have ten children. He attended the Public Schools in Effingham County,... View Obituary & Service Information

The family of Rev. Enos V. Garvin created this Life Tributes page to make it easy to share your memories.

Send flowers to the Garvin family.