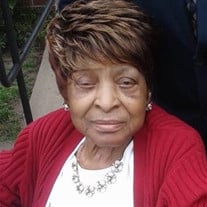 Florence Jackson Williams, daughter of the late Lula Mae Williams Deloach and Louis Williams was born in Furman, S.C. February 5, 1939. When Florence was born, she was given the nickname "Sugar Gal" because she was so sweet and pretty. As years went on she was called "Sug". She definitely lived up to that name, for she was indeed as sweet as could be to all that she encountered. At an early age she attended Robertsville Elementary School in Jasper County, S.C one of her first jobs as a young adult was cleaning offices. With a nourishing spirit and kind heart, she had a knack for caring for others. This led her to work sitting with and caring for the sick and elderly. In later years her family moved to Savannah, GA. Florence continued working within her passion. She helped raise and care for many children to include nieces, nephews, cousins grandchildren and great grandchildren. She was united in Holy Matrimony to Mr. John Jackson, Sr, in 1957. This union was blessed with eight children. Mr. John Jackson, Sr. preceded her in death on December 15, 1992. She passed away peacefully on Tuesday, September 25, 2018 and went to be with the Lord. Her life will be cherished by her children: Lawrence Williams, Sr(Constance-deceased), Julia Williams(Jefferey), Christina Jenkins(Willie),John Jackson, Jr.(Sandra),James Jackson, Ricky Jackson(Monica), all of Savannah,GA. Rudolph Jackson(Corliss) of Locust Grove, GA, She was preceded in death by a son, Festus Sidney Jackson(Kim) of Savannah, GA; Survived by two brothers, Willie Mitchell, Bronx, NY, Albert Deloach, Savannah,GA; Two sisters, Alberta Dixon, Miami, FL, Mary Wilson Thomas(Roosevelt), Savannah, GA; 55 Grandchildren; 75 Great grandchildren; 3 Great-Great Grandchildren a host of nieces, nephews, relatives and friends. Funeral service will be held 12pm Saturday, September 29, 2018 at New Generation Full Gospel Church 2020 Tennessee Avenue Interment Woodville Cemetery.

Florence Jackson Williams, daughter of the late Lula Mae Williams Deloach and Louis Williams was born in Furman, S.C. February 5, 1939. When Florence was born, she was given the nickname "Sugar Gal" because she was so sweet and pretty. As years... View Obituary & Service Information

The family of Florence Williams created this Life Tributes page to make it easy to share your memories.

Send flowers to the Williams family.