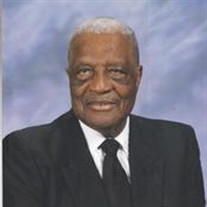 The future is not ours to know, and it may never be, so let us live and give our best, never anticipating or doubting-the power of our Savior; Asking nothing of tomorrow except- THY WILL BE DONE. George Ponder was born July 16, 1916, in Screven County, Georgia, to the proud parents of the late Alex and Mary Ponder; he was the eldest son . He was the loving father of five wonderful children. Deacon Ponder accepted Christ as his personal savior at an early age. After moving to Savannah, Georgia, he united with the congregation of Tabernacle Missionary Baptist Church. His formative education was received in the public schools of Screven County. A veteran of the Korean War, World War II, and the Vietnam War, SSG/E6 George Ponder, retired after serving his country for 30 years. The flag draping his casket is given by a grateful nation for his meritorious service to his country in time of war. During his lifetime, he was a member of several civic and fraternal organizations: 33rd Degree Mason, Shriners, a Life Member/Commanding Officer of D.A.V., V.F.W., and a lifetime member of the N.A.A.C.P. Also, he was responsible for the development of the Lapageville Memorial Park, and he generously supported many other charitable causes. Some have known and loved George longer than others and have enjoyed longer the privilege of associating with him at home, at church and in the community. But those of us who really knew him, regardless of the length of time, can truthfully say that his heart was of generous proportion. His loving spirit and steel-bound character, far more than his great achievements, made his long useful life one of great fulfillment and satisfaction. He loved and served his fellowman and in so doing, best loved and served his God. He served faithfully in the following capacities within the church: Chairman of the Deacon Ministry, Sunday School Supt., Chairman of the Finance Committee; Treasurer of the Spencer E. White, Sr. Scholarship Committee, a Trustee, a member of the Grubbs-Anderson Mission Ministry, and C.E.O. of Alice Street, Inc. His passing, Wednesday morning. March 7, 2012, is a deep and personal loss to his family and a deep and personal bereavement to his many friends of the greater Savannah community. In their hearts there will live admiration, affection and respect for him. His memory will be forever cherished by his loving and devoted wife, Connie, with whom he was united in marriage on March 31, 2001. They lived happily together until his passing. In addition to his wife, Connie, he leaves to mourn his passing daughters, Lola Ford, Miami, FL; Georgiann Ponder, New Jersey City, NJ; sons, Jerome Ponder. Columbia, SC; one daughter-in-law, Juliette Ponder, wife of deceased son, Charles; a step-son, Richard Hutcherson, Jr. (Shelia); 16 grandchildren; 29 great grandchildren; 8 great-great -great grandchildren; a God-child, Deja Gillans; and a host of nieces, nephews, cousins and other relatives and many friends. Visitation will be held from 5-7 PM Friday, March 9, 2012 in the funeral home chapel. Funeral services will be held at 11:00 AM Saturday, March 10, 2012 from First Tabernacle Missionary Baptist Church, 310 Alice Street. Entombment will be in Hillcrest Abbey West with Military Honors. Mr. Ponder will be reposing at the church on Saturday from 9:00 AM until hour of service.

The future is not ours to know, and it may never be, so let us live and give our best, never anticipating or doubting-the power of our Savior; Asking nothing of tomorrow except- THY WILL BE DONE. George Ponder was born July 16, 1916, in Screven... View Obituary & Service Information

The family of George Ponder created this Life Tributes page to make it easy to share your memories.

The future is not ours to know, and it may never be, so let us...

Send flowers to the Ponder family.