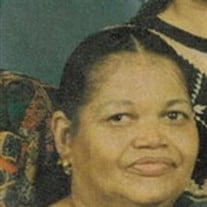 Mrs. Geraldine Wright, 69, passed away on Monday, October 5, 2009 at home under the excellent care of Hospice Savannah. She was a native of New York City, but lived in Savannah, Georgia for the last 35 years. She leaves to cherish her memories:... View Obituary & Service Information

The family of Geraldine Wright created this Life Tributes page to make it easy to share your memories.

Send flowers to the Wright family.