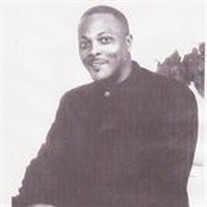 James Tyrone Jenkins (Amin), 50, passed away at home in Atlanta on Tuesday, September 25, 2007. He was born and lived most of his life in Savannah, Georgia. He later moved to Atlanta, Georgia. He was affectionately known to many as "Amin". He... View Obituary & Service Information

The family of James T. Jenkins created this Life Tributes page to make it easy to share your memories.

James Tyrone Jenkins (Amin), 50, passed away at home in Atlanta...

Send flowers to the Jenkins family.