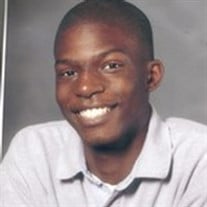 James L. Toles IV, 19, passed away on Monday, December 28, 2009 in Palm Bay, FL. as a result of injuries sustained in an automobile accident. He was an exceptional young man who will truly be missed by his family, teachers, co-workers, and many... View Obituary & Service Information

The family of James Lafayette Toles IV created this Life Tributes page to make it easy to share your memories.

Send flowers to the Toles family.