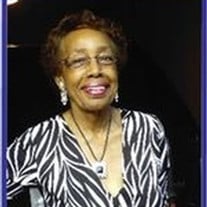 Jeanette Coleman Riley, 78, passed away Sunday, March 9, 2008 at Emory University Hospital in Atlanta, GA. The Savannah, GA, native was born on June 30, 1929 to the late Allen E Coleman and Ella Mae Coleman. Jeanette grew up in White Bluff attended Haven Home School and attended Cuyler Beach High School. In 1951, she graduated from Savannah State College with a B.S. degree in elementary education. She taught school for the next 45 years in Treutlan County, Screven County, Hart County, and Effingham County. She was a substitute teacher for Chatham County Public Schools and Atlanta Public Schools during her retirement. Jeanette was an active volunteer for the American Cancer Society, a loyal and dedicated member and trustee of Mt. Herman Baptist Church. She was a staunch supporter of Savannah State University (formerly College). She loved to travel, shop and take in the theatre or a concert. She truly embraced living and taking in what life had to offer. After living 75 years in Savannah, Jeanette relocated to Atlanta to live with her daughter and son-in-law. She immediately became active in the Carlos Sander YMCA senior activities and the Agape Community Center, participating in water aerobics, strength training and attending events throughout Metro Atlanta. She joined Antioch North Baptist Church and served on the women's mission. She embraced her new community and made many wonderful, lasting friendships. Jeanette was preceded by her brother, Lawrence Coleman of Savannah, her sister, Priscilla Coleman Tremble Mainer of Statesboro, Eloise Coleman Mack of Savannah, Allen Coleman, Jr., of Columbus, OH, Theresa Coleman of Savannah and Edward Gus Coleman of Savannah. Jeanette leaves behind her loving daughter, Deborah Riley Draper; her son-in-law, Michael Anthony Draper; her loving sisters, Lydia Lott of New Jersey, Mary Coleman of Savannah and Hazel Coleman of Savannah. She also leaves behind a host of nieces, nephews, great nieces and great nephews who adored her. She will be remembered as a great friend and educator. She will be missed by her family, friends and the countless teachers, students and colleagues she touched along the way. The funeral service will be held at Mt. Herman Baptist Church on Saturday, March 15, 2008 at 1 pm. The interment will take place immediately following the service at Cedar Grove Cemetery. Flowers can be sent Jeanette C. Riley c/o Williams and Williams Funeral Home, 1012 East Gwinnett Street, Savannah, GA, 31401; memorial contributions can be made to The Jeanette C. Riley Memorial Fund c/o The Agape Community Center, 2353 Bolton Road, Atlanta, GA 30318.

The family of Jennette Riley created this Life Tributes page to make it easy to share your memories.

Send flowers to the Riley family.