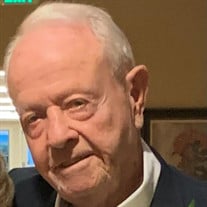 On Monday, February 28, 2022 John Riley Baker, 89 of Townsend, Georgia and most recently West Columbia, South Carolina finally made it home. He was predeceased in death by his father, Turner A. Baker, Sr., mother, Elyea Smith Elliott, siblings Turner A. Baker, Jr. and Patricia Hurst, granddaughter Stephanie Heath and Sons-in-Law, Thurmond Grimsley and William “Billy” Mingledorff. He is survived by his four loving children whom he loved dearly Terri Grimsley, Debra Barnhill (James), Juli Mingledorff and John Baker, Jr.; five grandchildren who affectionately called him “Papa”, Jennifer Wingard-Hall, Matthew Wingard, Hugh Fannin (Melissa), John Fannin and Zachery Grimsley (Amanda), two-great-grandchildren Mia Barnhill and Anderson Hall, his wife, Jan Rogers, first wife, Billie Baker Futch, Stepsisters, Nancy Lee and Betty Heery. Pallbearers will be nephews Fred Mc Bride, Louis and Joel Baker, John Fannin, Anderson Hall and Zachery Grimsley. Honorary Pallbearer is his grandson, Matthew Wingard because when you saw one the other waOn Monds right there, too. John served in the Korean War and proudly served in Japan. He loved sharing stories about his time in the service. John was a devoted father to his children spending time camping, playing golf, basketball (where his children say he cheated) and enjoyed scaring the neighborhood children on Halloween. He was an avid Auburn Tiger, golfer and enjoyed fishing in the salt water. He is probably most remembered by his family for his love of playing the piano most notably “Annie Had a Baby” and “Found a Peanut.” John enjoyed a big bowl of ice cream, chocolatta (any chocolate candy), Lowcountry Boils and Carolina sweet tea. He graduated from Auburn University where he put himself through college playing in local bands and was proud to use his GI Bill to receive a college education. John worked for the Federal Government as a Civil Engineer at Fort Stewart and Hunter Army Airfield. He was proud to be an Engineer and often encouraged his children (only his daughter Terri followed in his footsteps), grandchildren and great grandson, Anderson to follow his lead. We appreciate the loving care provided by the staff of Colonial Gardens in West Columbia, South Carolina especially Cora, Monica and Jackie for loving Papa like he was your own and Lexington Medical Center 6th floor for the care provided in the final days. Papa always said “No boys and very few men” can do what he does and he’s right he was one of a kind and will be missed by those who loved him. Our War Eagle finally got his wings, fly high Papa we love you!

The family of John R. Baker created this Life Tributes page to make it easy to share your memories.

Send flowers to the Baker family.