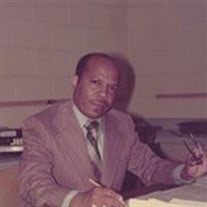 Mr. John I. Wright, 82, passed away on Friday, July 10, 2009 at Heritage Home Care in Conyers, GA. At an early age, he joined First Bryan Baptist Church. He was a product of the Chatham County School System and graduated from Savannah State College (University). In 1949, he founded the Alpha Gamma Undergraduate Chapter of Omega Psi Phi on the campus of Savannah State College. After graduating from college, Mr. Wright served his country by enlisting in the United State Army. He served during World War II and the Korean conflict. He was employed as a Postal Worker and was President of the Savannah branch of the National Postal Union. He was a member of the Boy Scouts' Organization and Extension Committee. His volunteer work with the Scouts led to an appointment as chairman of the Chatham District of the Family Enrollment Campaign of the Boy Scouts in 1965. John was a member of The Order of The Masonic Mt. Moriah Lodge#15. He was also a member of the Blazers Social Club and the Fun Bunch. He was employed as a Merchant Seaman, at Savannah State College as an accountant, managed the box office for the Savannah Civic Center for the city of Savannah and worked with the Longshoreman's Association, Local #1414, where he retired. Prior to his retirement and after, he served as a Board Member of the Checkers Association. He leaves to cherish his memories; a loving daughter, Mrs. Cheryl McLaurin (Wilbert); two caring and loving grandchildren, Garett Mitchell McLaurin and Devon Claire McLaurin; one brother, Mr. Victor Wright (Elsie); two nieces, Mrs. Francine Anderson (Leslie), Ms. Vicki (Bambi) Ward; two nephews, Mr. John Lawrence Wright, and Mr. Troy Wright; several cousins, Peola W. Scott, Maria Wright, Gwendolyn Anderson (Calvin), Deborah Middleton (Leroy), Arthur Wright Sr., Johnnie Mae Wright; Janice Wright; and a host of other cousins, family Members and close friends. Funeral services for Mr. John I. Wright will be held 11:00am Saturday, July 18, 2009 at First Bryan Baptist Church, 575 West Bryan Street. Reposing at the church from 9:30am until the hour of service; Interment, Hillcrest Abbey West. Visitation: 6-7pm, Friday, July 17, 2009 in the funeral home chapel.

Mr. John I. Wright, 82, passed away on Friday, July 10, 2009 at Heritage Home Care in Conyers, GA. At an early age, he joined First Bryan Baptist Church. He was a product of the Chatham County School System and graduated from Savannah State... View Obituary & Service Information

The family of John I. Wright created this Life Tributes page to make it easy to share your memories.

Send flowers to the Wright family.