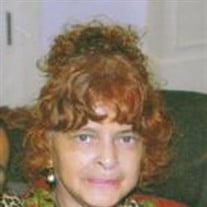 June R. Broadnax was born July 2, 1945 to the late Jeanette and John Henry Broadnax in Jacksonville, FL. June was the youngest of three; her older brother John preceded her in death. At sixteen months old, she moved to Charleston, SC to be raised by her late aunt and uncle Viola (Broadnax) and Edward J. Edwards, Sr. She graduated from Immaculate Conception High School in 1963, where she was an Alpha Kappa Alpha debutante. After graduation, she returned to Jacksonville to live with her father. By divine providence in 1969, June met the love of her life, Michael while they both were touring the FBI building in Washington, DC. After a brief courtship, they were married March 7, 1970 in Carlton, GA. To their union two children were born, Jeanene and Michael. While married to her military husband, Michael, they traveled extensively nationally and internationally. They visited many European and Caribbean countries. Duty stations included Ft. Riley, KA; Ft. Hood, TX; and Ft. Gordon, GA; Pisa, Italy; Giessen and Mainz Germany. In Germany, June owned and operated a daycare business. In 1988, they relocated to Savannah where she pursued her passion caring for children by securing employment at White Bluff Presbyterian Church and Kindercare Daycare Centers. She became a dedicated member of Overcoming by Faith Church, and the National Council of Negro Women Savannah Section. She was a devoted wife and mother and was dedicated to the well being of her family. She enjoyed shopping for antiques, movies, eating out, and festivals. She was very interested in cultural events and attended them regularly. She leaves a loving and devoted husband of 41 years, Michael Delph, Sr.; daughter, Jeanene Delph-Thompson (Chris) of Charlotte, NC; son, Michael Delph, Jr.; brother, Leon Broadnax (Mercedes)of Jacksonville, FL; sister, Thelma Noisette, of Charleston, SC; and a host of other relatives and friends. Funeral services for Mrs. June R. Broadnax-Delph will be held 10:00 am, Tuesday, November 30, 2010 at Overcoming By Faith Church, Pastor Ricky R. Temple, officiating. Interment: Evergreen Cemetery, Jacksonville, FL. Viewing: 1-8 PM Monday at the funeral home.

June R. Broadnax was born July 2, 1945 to the late Jeanette and John Henry Broadnax in Jacksonville, FL. June was the youngest of three; her older brother John preceded her in death. At sixteen months old, she moved to Charleston, SC to be raised... View Obituary & Service Information

The family of June Rita Delph created this Life Tributes page to make it easy to share your memories.

Send flowers to the Delph family.