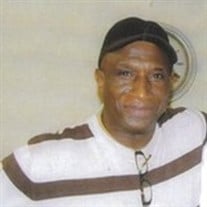 Madison D. Orr was born in Savannah, Georgia on May 25, 1952, to Mr. Brooker Riddle and Mrs. Carrie Lou G. Orr of whom both preceded him in death. He was also preceded in death by his sister Pearl Ruth Orr Hamilton. Mr. Orr departed this life... View Obituary & Service Information

The family of Madison Orr created this Life Tributes page to make it easy to share your memories.

Send flowers to the Orr family.