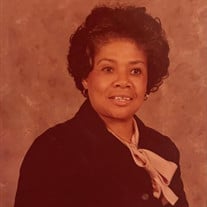 Mrs. Marian Williams Dobson, age 93, transitioned on Sunday evening, March 20, 2022 in her home surrounded by love. Marian was born February 20, 1929 in Savannah, GA the daughter of the late Daisy Lee and Clarence B. Williams. She was educated in the Chatham County Public Schools. She was a 1948 graduate of Cuyler-Beach High School. Marian was employed as one of the first black women on the Nancy Hanks Train in Savannah and worked for many years. She was also later employed by Candler Telfair Hospital which later became Candler Hospital. After retirement, Marian still continued to work and begin volunteering as a Grandparent at the E.O.A. she was dedicated for many years. Marian was a member of First Bryant Baptist Church for many years where she served on the Usher Board. She later moved her membership to First African Baptist Church many years later under the leadership of Rev. Thurmond Tillman. Marian was preceded in death by her parents Clarence B. Williams and Daisy Lee Williams, husband, LeRoy J. Dobson, Sr. and her son, LeRoy J. Dobson, Jr. Marian was a phenomenal woman, mother, grandmother, great grandmother, cousin, and friend that knew the Lord. She was blessed and loved and a blessing to everyone that care in contact with her. She will truly be missed. Marian leaves to cherish her memories to: her devoted son, Joseph Dobson, Sr. (Vanessa Abdullah), four grandchildren, Joseph (Joey) Dobson, Jr., Jacqueline Y. Dobson (Caregiver), LeJoy Dobson Fields (Cedric), and JaBari Dobson, one great grandchild, Sydnei A. Campbell, step-grandchildren, Jonathan Abdullah and Ieshia Abdullah, several step-great grandchildren, special cousins, James (Butch) Smith, Sr. and Rosa Brown all of Savannah, GA, other relatives and friends including a devoted best friend for over 75 years, Mrs. Willie M. Muctherson. Walk Thru View Fri. March 25, 2022 From 2pm to 6pm in the Sadie B. Williams Room. "Masks Are Required"

Mrs. Marian Williams Dobson, age 93, transitioned on Sunday evening, March 20, 2022 in her home surrounded by love. Marian was born February 20, 1929 in Savannah, GA the daughter of the late Daisy Lee and Clarence B. Williams. She was educated... View Obituary & Service Information

The family of Mrs. Marian W. Dobson created this Life Tributes page to make it easy to share your memories.

Send flowers to the Dobson family.