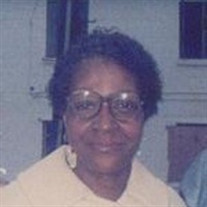 Martha Kent, 76, passed away Tuesday July 24, 2007 at Memorial Medical Center after a short illness. She was born in Lady's Island, South Carolina, but lived in Savannah all of her life. She was a member of Little Bryan Missionary Baptist Church.... View Obituary & Service Information

The family of Martha Kent created this Life Tributes page to make it easy to share your memories.

Send flowers to the Kent family.