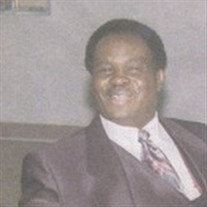 Rev. William Russell, 78, passed away on Tuesday, October 6, 2009 at Memorial Health U.M.C. He was a native of Savannah, Georgia and attended the public schools of Chatham County. Rev. Russell was the Pastor of St. James Baptist Church, West... View Obituary & Service Information

The family of Rev. William Russell created this Life Tributes page to make it easy to share your memories.

Send flowers to the Russell family.